After a day watching great performances and audio visual presentations at the VCA Centre for Cultural Partnerships launch, and listening to moving words around the importance of the role of the arts and creativity in community development, I spent some time reflecting on the the role of visual and performing arts in my own life from childhood.

As I grew up, the arts were an expression of hope and creative vitality, a world of dreams and a voice of imagination. Mum’s vibrant paintings covered the walls, and the smell of

turpentine would often greet me after school, a fresh oil painting propped up with small clumps of oil paint gracing the bottom rung of her easel like raindrops on a windowsill . I was given a special hardback visual diary when I was around eight. How I wish I filled it up with many more images and words, even sketches and first drafts – I wonder if I will ever feel the same way about this blog? I have a distinct memory of taking the day off school to see “Gone with the Wind” at the cinema with my mother when I was ten. The teacher was told it was for “cultural and educational purposes”. Of course, I was most impressed with this approach to education!

I recall spending weekends and evenings during my childhood attending final rehearsals and matinees at the local theatre where mum played piano for musicals such as Guys & Dolls, The Sound of Music, The King & I and South Pacific! And of course, the sound of the piano being played, often impromptu, filled the house (thankfully not more songs from those musicals, but classical, jazz and cabaret) I remember many weekends spent with dad visiting the museum, the Art Gallery of South Australia, the library and the Botanical Gardens. My grandfather enjoyed taking  photos of his beautiful garden and as a young child I would savour the times he would get out the slide projector or Reflex viewer.

Sometimes, as a teenager I was taken to art gallery openings and I recall being mesmerized as a sixteen year old by a Charles Blackman exhibition. Again, it was part of my “education”. 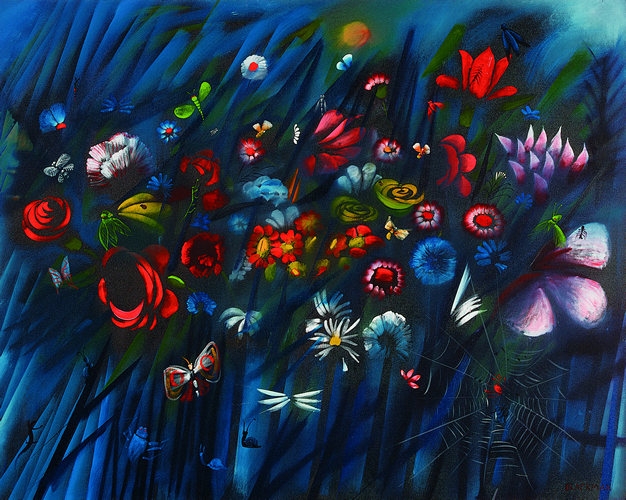 When I was 17 I met the tall thin and sprightly Kay Gordon at one of these openings. Kay had shaggy, short, silver white hair and wore brightly coloured kaftan tops with black pants. This eighty-something year old had eyes that lit up with childhood fascination at life and  bell-like laughter that rippled through your bones. When she was in her fifties she took up photography and led an amazing life, taking photos for National Geographic and the Royal Photographic Society. She invited us to her home for audio-visual nights with her latest images – spectacular blades of grass in macro view that lit up on screen like fireworks, set to music by Tangerine Dream.[youtube=http://www.youtube.com/watch?v=EKUaC3Z1udE&feature=related]
Her charming husband Adrian, a Meteorologist also in his eighties, wore black jeans, taught at Flinders Uni and went to Red Hot Chill Peppers concerts. Kay and Adrian had lived in many countries including Iran, the Philippines, the Caribbean, Hawaii, Bermuda and London before returning to Adelaide. They were wonderful hosts, and gave me a great appreciation for passion based living. (I read that Adrian died in 2000, and I can’t find anything about Kay anywhere. I last spoke with them in the early 90’s and unfortunately lost touch after moving interstate. When I moved Kay said “I hope you find many interesting people in your carriage [of life]”)

I used to enjoy drama at school and joined the local youth theatre, and watching the performances last Thursday was a reminder that I’ve probably neglected this area of the arts for too long (although it  sometimes finds its way into playtime with the kids!)

Yesterday I told mum how grateful I am for having the opportunity to appreciate the arts at home and in my local community. I hope I can provide my children with similar formative experiences and then beyond- exploring the application of the arts, technology and digital media in community cultural development.

What about you? What role has the arts played in your life, or that of your community?

2 thoughts on “A creative education and Kay Gordon's legacy”