I was tagged a while ago by Luis Suarez and now by Stephen Collins for a blogger meme. There seems to be no escaping this meme – so here you go, eight random facts about me!

1. I have three young boys, the eldest starts school this year :)

2. I had the great opportunity to create a paint-on-glass animation in ’97 (glass is backlit and you paint each frame.) 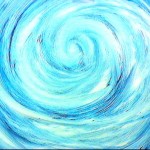 3. I used to be a vegan. I eat almost everything now, but still love an occasional healthy felafel or miso soup in-between eating animals :0
4. When I was 11 I won a competition to see The Dark Crystal for inventing some strange creature. Early on I was taught about the power of imagination.

5. Like Stephen Collins, I was an occasional respite Foster Carer for disadvantaged children back in my twenties (on weekends). It was a great experience. If you are thinking of doing it, just do it.

7. I didn’t get my car license until my late twenties, mainly because I always lived near the city. Still, I owe a lot of car rides, which I am making up for now with my children (and will be for the rest of my natural life.)

8. I went to Berlin in 1989 (part of an exchange program). West Berlin was an amazing, vibrant city. A great experience. We were told by the local educators who had family in the east, we would never see the Wall come down in our lifetime. One year later it came down. Lesson: never say never.

Which leaves me with the question – who would I like to know eight random things about?

You will not be plagued or grow warts if you do not reply! However, “the rules” are:

Let them know they’ve been tagged.