Prievidza “ http://cowmanauction.com/pcapnvxk.php?Fox=d3wL7 Searching the Internet has become the way we remember each other.”

http://debashishbanerji.com/books/edited/rabindranath-tagore-in-the-21st-c-theoretical-renewals/ “You’re never really gone until no one Googles your name.“

Once upon a time websites had hit counters. View. *Hit*. View. *Hit*. Now we have Twitter followers, fans, and sprinklings of klout. Which is why I liked this artwork by Zach Gage. The birch box uses facial recognition technology to gauge how many “hits” the artwork has had (via psfk.com) 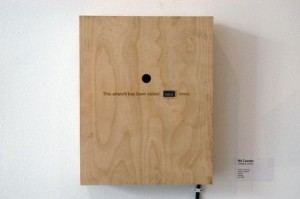 Zach says “Despite the problems that popularity has led to in the physical world, we have opted to translate this metric into the digital/virtual space.”

This was his version 2 years ago and I like how you can see the progression of an idea  – Hit Counter from zach gage on Vimeo.

It reminds me of an exhibition I saw in the mid ’90s in Melbourne, which challenged the whole notion of interactivity and the relationship between technology and people. Don’t you think it’s fun when artists flip our ideas of technology around into a physical representation/metaphor?

I was interested to see some of Zach’s previous work. And discovered Someone Anyone on his CV along with another project Data 2010.

Someone Anyone is a listener bot.

Sometimes you just need someone to listen to you. Someone Anyone greets you, but won’t say any more. It’s content to just listen.

Although Someone Anyone doesn’t respond, its presence in a communication program helps me feel that it really is listening. Hopefully it will be helpful for you too.

Someone Anyone doesn’t log or record its conversations. It doesn’t judge or remember. It just enjoys being there for you.

You can talk to Someone Anyone on Jabber or gChat, Its screenname is: SomeoneAnyone@bot.im”

Or of course, you can talk with a good friend. But I guess the curious thing is, you might have met that friend through the internet in the first place. Do you ever consider where or how your conversations are stored – whether in blog posts, tweets or instant messaging ?